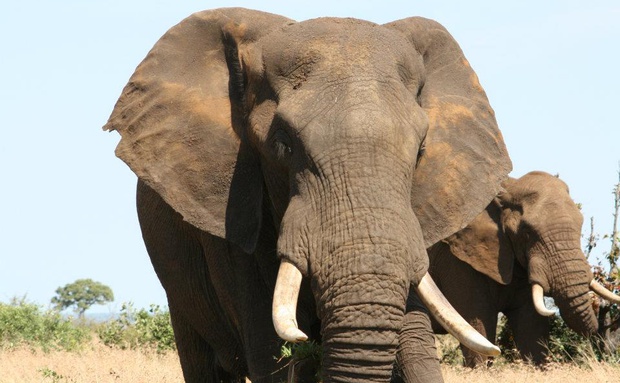 PART 1
There are three living species of elephants – the African bush or savannah elephant, the African forest elephant, and the Asian elephant.

The collective noun is a herd, or more endearingly, a parade! The elephant is the largest land mammal, the male named a bull, female a cow and infant a calf. Life expectancy is 60 years, and the gestation period is an amazing 22 months. Theirs is a matriarchal society led by, usually, the oldest female in the herd. Young bulls leave the herd after puberty, and mature bulls only join the herd to mate.

Believe it or not, the elephant is related to the dassie or rock hyrax. Similarities are males have internal testes, females have two teats between forelegs; neither have gall bladders and the lungs are attached to the ribcage.

The elephants’ habitats vary from savannah regions to rain forests and semi-deserts. They are herbivores, feasting on grasses, leaves, bark, and fruit of certain trees.

They have the largest brain of all mammals at 6kg, and the skull is not made up of solid bone as it would be too heavy. It consists of a cell-like structure like a honeycomb. A large elephant could have a skull that weighs as much as 850kg!

The trunk is a fusion of the nose and upper lip, consisting of approximately 60 000 muscles, and is used much like a human hand. It can hold 11 litres of water which is squirted into the mouth, or over themselves to cool down. They also use it to throw mud and/or soil for the same purpose. Calves only have control of their trunks at 12 months.

Both sexes have tusks, the females often as long as the males, but thinner. These are modified incisors and continue growing throughout their lives, one third being embedded in the skull. They are used for defence, fighting, or gaining access to food. They also protect the trunk. Sometimes one tusk is shorter than the other because it is used more often, thus an elephant is called right or left tusked. Most elephants are right tusked.

Elephants have six sets of teeth during a lifetime. As they wear out, new teeth erupt at the back of the mouth and push the others forward. Nearing the front of the mouth, they fragment and fall out.

With thanks to Carol Fennell of the Marloth Park Honorary Rangers