Apex Animal in Action: Part 1 The Bigger Picture of Carnivores

Ever since the existence of man we have been competing to become the apex being and to keep that position. We as a living specimen have managed to conquer the position, but are slowly losing the moral high ground and mastery of the ability to compete wisely. Two factors I call Human Need & Human Greed are the dominating features posing the biggest threat to the quest for conserving these animals for the next generations. Human numbers are dramatically increasing exponentially whilst these species which are positioned at the apex in nature have survived and evolved over millions of years, but are slowly losing the battle in numbers and the quest for territory.

Its known to be a group of animals that evokes more emotion and sentiment than any other group in the Animal Kingdom, and there are very specific reasons for that. It's the group of species responsible for ancient myths creating a manner of respect but also fear. It's a group of animals stirring hatred by plenty of livestock farmers but also causing admiration amongst animal and nature lovers. Their presence creates more energy and interest per square area than any other group despite their lower numbers. More documentaries appear and more pictures are produced by fanatic nature eco-hunters, but on the opposite of that scale of the conundrum they weigh in to form the most sought after specimens in trophy collections. Their supreme power and mystery combined with their elegance and often charisma has the ability to keep the human interested and intrigued by them.  Ancient man had been in no admiration for these species although they are used in traditional wear and medicine or muthi and they appear on a large number of Coat of Arms, battle dresses, etc. The fear of them killing livestock has caused evolvement of all forms of predator extermination and deterring mechanisms including poison, gin-traps, wolf-traps etc.

It’s only the modern day human who developed a valued emotional bond with these species since they no longer pose a direct threat to their livelihood or a life threat to their own survival.  Today we call it Eco-Tourism or we embark highly excited on Wildlife Safari's. The Bottom-line is that these species now sparked mixed-emotions in the modern day challenge to preserve and respect them for their superior abilities.

The big question now is "Are we gaining or losing in our strive to preserve"? This question needs to be weighed all the time against the skewed 80/20 principle of what I refer to as the above mentioned Human Need & Human Greed factors. In both cases exploitation takes place with the backdrop of knowledge and empirical proof that it's not sustainable and is carelessly implemented because in the case of exploitation there is seldom a rational of sound principles and the drive to adhere to sustainable and responsible use of natural resources. A simple example to consider is that 80% of the worlds waste is created by 20% of the population. Now this topic can be exhaustive and challenging and that's in my opinion why politicians and diplomats firmly avoids to address these aspects when seeking solutions rather than making dodgy promises which were not tested against sustainable resource utilisation.

The Apex Predators are those Key-Indicator species of the wealth and health of a system and its also at this conflict zone where our responsibility is challenged. It's an opportunity to show sound accountable decision making in terms of exploitation and care for the land and animals, which results in a spill-over to its people.

In the next session I will try to give some background on the classification of Carnivores vs Predators and give my view on the importance of this. (Gerrie Camacho May 2019)

Apex Animal in Action: Part 2 How and Why Classification 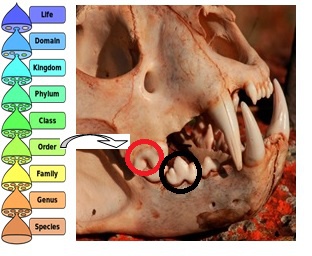 The human mind wants to package everything orderly before we share a glass of wine in the comfort of our lounges. We need to be able to parcel before we can call it a product of confidence. Unfortunately we human as a specimen tend to get lost in the semantics of our own interpretations and abilities to absorb rather than to understand the fluidity of nature. More so often we fall into the trap of knowledge rather than valuing experience. Experience is often also transferred in experiential skills and not only the written statements. My reasoning is due to the fact that nature often tend to show varying results in the behaviour dynamics of carnivores, depending on the combined co-variants created by nature and man-kind. Therefore the classification is merely of academic value as in this article my focus will dwell towards combining this information with experiences in the field.

Carnivora are a vertebrae Order with very specific characteristics and falling under the Class Mammalia, within the higher Kingdom of Animalia.

This group of predatory animals are often confused because of its feeding habit. Currently the most common used taxonomic classification system (Meester et.al. 1986) is based on the dental composition and specific anatomy of the P4 (red circle) /M1 (black circle - Premolar/Molar) referred to as carnassials (Figure1). Most carnivores boast carnassials which acts as a scissor-like cutting mechanism mainly applied to cut pieces of flesh or crush e.g. rodents. Don't confuse canines with carnassials as pronounced canines are also found in many species outside this Mammal Order. These canines act mainly as a defence and attacking mechanism. Carnivores also use them to hold onto or cause extensive deep haemorrhage and bleeding in their prey as well. Their molars are primarily inconspicuous and does not serve any feeding purpose much other than crunching small prey. Carnassials are used to cut of chunks of meat in most carnivore species and these large chunks of meat are swallowed intact.

Their jaws can only hinge up and downwards and they do not have the ability to chew (masticate) such as herbivores and most omnivorous animals. They have strong masseter and temporalis muscles which are mainly aligned at a strongly conspicuous jaw-joint and the teeth allowing for a powerful scissor-like action. The trade-off for not being able to chew hands them a more powerful biting advantage due to this stronger anatomy of the jaws hinging structure. They can crush pieces of bone into smaller pieces without a rotating action. Hence a more advanced biting strength and killing ability. In order to compensate for swallowing chunks of meat and bones, they again contain very strong digestive enzymes where in the case for e.g. hyenas they can even digest horn, hooves, bone and teeth which is very unique to the this group.  Carnivores are a group of animals which are referred to as predators due to its mainly predatory habit, but all predators are not necessarily carnivores. Carnivorous animals is a Latin expression meaning flesh feeding animal. Killer whales are the largest predators whereas species such as the praying mantis and dragon flies are also seen as predators due to the fact that they prey on and eat other living beings.

Carnivores also have a different physical ability in term of their flexible design to twist and hold down prey without causing damage to their muscles and skeletal structure. They form a long term bond with their young and will mostly protect a territory. They are species that mostly occur at a relative low density and abundance and in need of relatively large to extremely vast home ranges. Wild dogs and cheetahs for example are known to utilise vast landscapes in order to fulfil their requirements to feed and survive. Some species such as African wild dogs will have a winter time denning period where they tend to stay in one area and start roaming again once the pups have turned to yearlings. Spotted hyenas on the other hand has a much more complex denning system and use them over longer periods within very specific areas.  Carnivore's feeding habit differ largely from herbivorous animals but are very similar to that of man-kind. They will mainly fill their stomachs with food once a day and relax after feeding. Once this high protein diet has been fully digested they will empty their stomachs usually before embarking on the next hunting expedition. The benefit of hunting with an empty stomach gives them a physical as well as physiological advantage. The hunger enzymes also entices alertness and aggression. Only when large sized prey animals are killed they tend to spend longer periods with the carcass as is seen with leopard, hyena, lion etc.

I wouldn't dwell too much on the taxonomic classification system or semantics as there are enormous discrepancies and measures of descriptions. It can become complex and insignificant whereas to me the ecology and impact of these animals are something of more importance. Carnivora are sitting at the top of the food chain and occur at low numbers, with a usual very strong pecking order or hierarchy, especially in social species such as meerkat (suricate), banded mongoose, dwarf mongoose, spotted hyena,  lion etc.  Pecking orders or dominance is also found in solitary species such as genets, caracal, leopard etc.

Globally there are more than 280 classified carnivore species classified in five different sub groups called Sub-orders. South Africa only have two of these five Sub-orders and does not have bears, raccoons and true skunks, which belong to the other three Sub-orders. All carnivores on the African continent fit into the two Sub-orders Feliformia (cats) and Caniformia (dogs). Africa houses close to 70 of these carnivore species and South Africa 48 species including the seals which falls under the canid Sub-order. Mpumalanga houses 36 of these species and in the Lowveld region an approximate 33 species could be found.

In follow-up articles I would like to expand in a bit more detail on a certain number of the above mentioned characteristics and behaviour patterns. I would also like to take the opportunity to focus back onto the Lowveld region and even more so on Marloth Park and its unique features and the human/wildlife interface in this system.   (Gerrie Camacho June 2019)