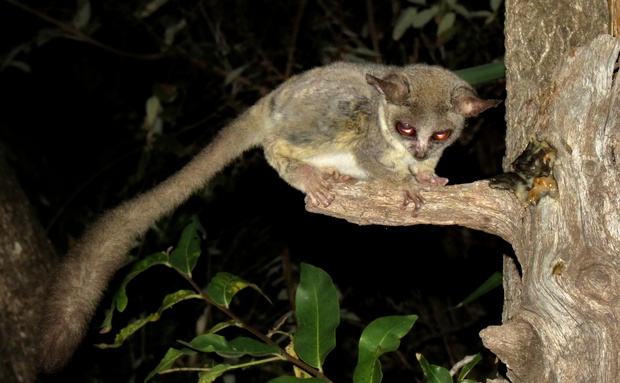 Take your favourite sundowner tipple outdoors on a clear evening at Needles Lodge in Marloth Park and you’re almost guaranteed to see them – the little nocturnal acrobats! They are of course Lesser Bush Babies, tiny and cute as buttons!

Galago’s, Lesser Bush Babies, are part of a group of mammals known to have preceded the apes in the evolutionary process. They are extremely agile and can leap distances of 12 times their own length!  (Up to 2.25m – 7 feet!) These pixie-like creatures have large, bat-like ears that give them excellent hearing, enabling them to track approaching insects in the dark. Insects form a large part of their diet. They also eat tree sap.

Their hearing is so good that when they’re sleeping during the day, they fold their ears to cover their ear holes to prevent the sounds of the bush from waking them up! They have enormous eyes which are too big to revolve in their sockets, so Bush Babies must turn their heads to see around them. They can even turn their heads far enough to see backwards, over their shoulders!

Between 2 and 7 family members share the hideaway during the day, but they split up at night to search for food. Bush Babies live for 3 to 4 years in the wild. They are preyed upon by mongooses, genets, jackals, owls, and snakes.

Their tails, which are longer than their head and body, power their leaps made to catch prey, escape from predators, or get around obstacles. A less endearing trait of Bush Babies is that they urinate on their hands and thus mark their territories as they leap branch to branch. Bush Babies appear skittish and nervous, but they will approach fairy close to humans once they sense that we don’t present a danger to them.

So, as daylight fades into night, take a sip of your preferred tipple and watch the trees and bushes nearby. You’re bound to see one of Marloth Park’s little forest sprites performing its jaw-dropping acrobatics in the fading light just before dinner at Needles Lodge, your luxury accommodation in the bush.